You are here: Home1 / Blog2 / Criticality

Here is a great example from James Sylvester of how visually helpful the new Emerson 2140 PeakVue Plus is while working on site.

On a recent survey of a critical 110KW blower motor we noticed the PeakVue levels had increased. While at the machine we quickly ran the PeakVue plus and this highlighted the issue as a poor lubrication condition.

Instead of writing this in the report then living in hope the motor is correctly greased, we showed this at the machine to the site fitter and we were immediately permitted to lubricate the bearings and the levels reduced.

PeakVue Plus was great as we did not have to upload to the laptop to explain. We just showed them the colour chart indicating poor lubrication and they acted upon it there and then. 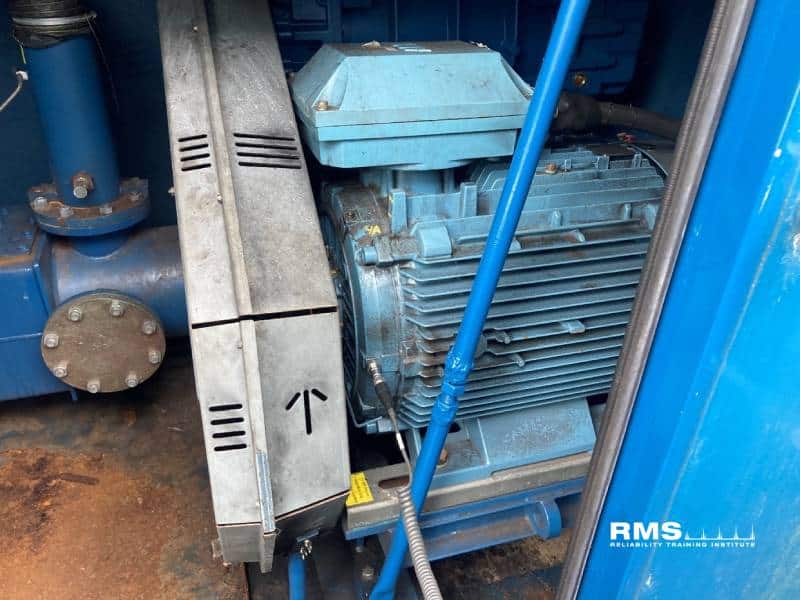 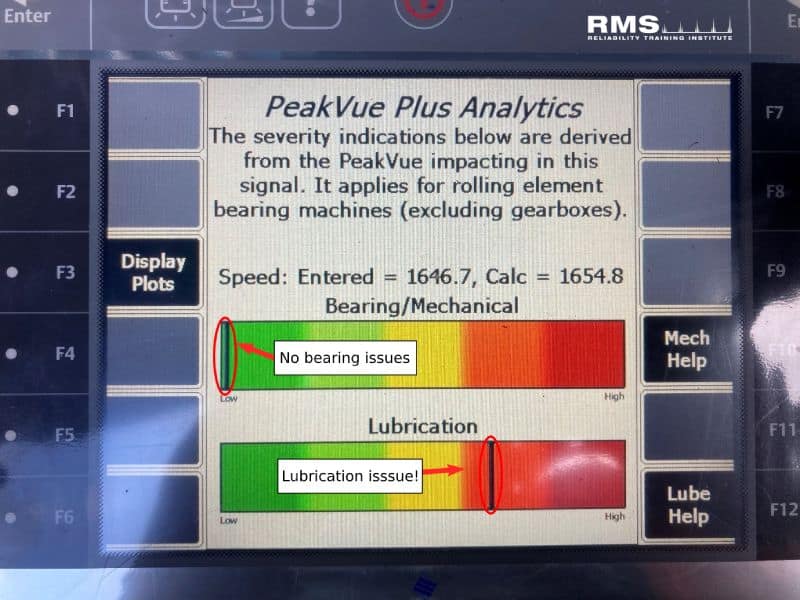 Image of the 2140 at the machine with the Lubrication issue highlighted. 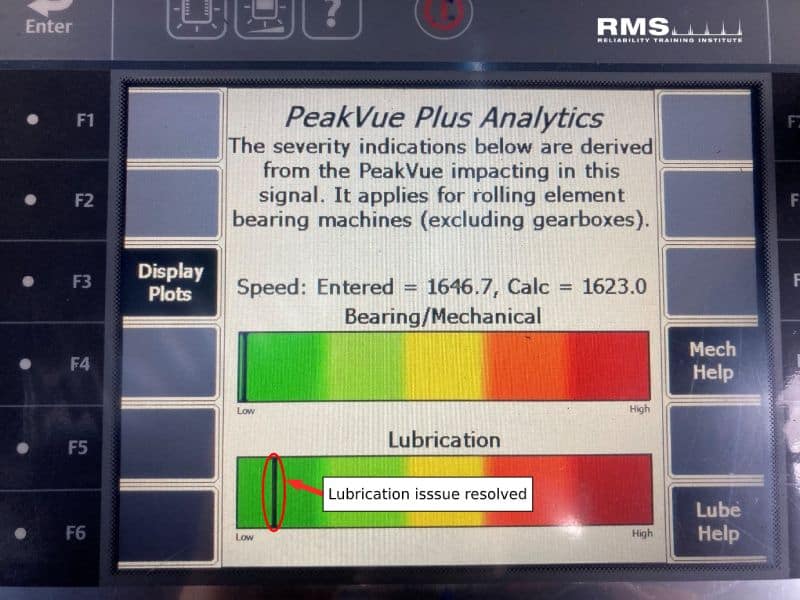 Image of the 2140 at the machine after controlled lubrication

“PeakVue Plus prescribes to the user the necessary corrective actions to preserve bearing life and ensure long-term availability of their assets,” said Robert Skeirik, director of machinery health product management, Emerson. “It’s like having an expert available at the touch of a button.” 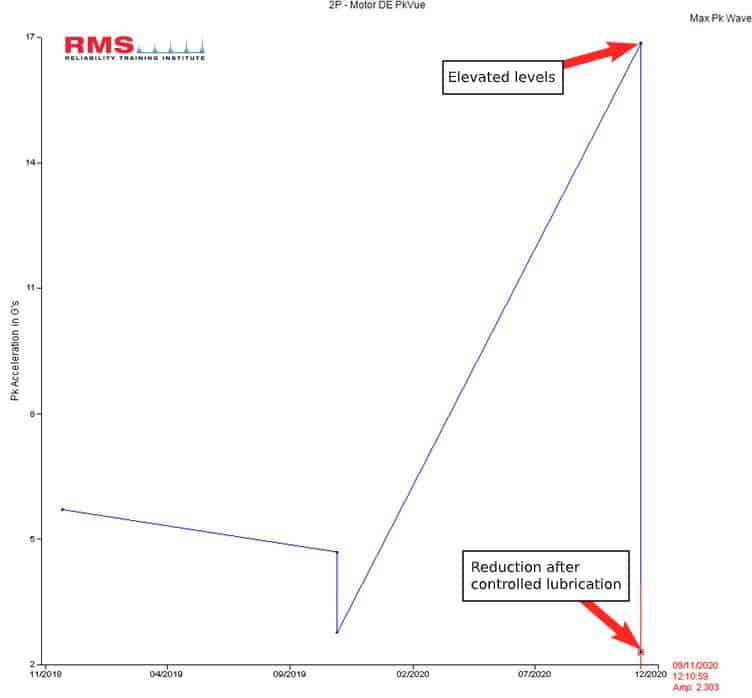 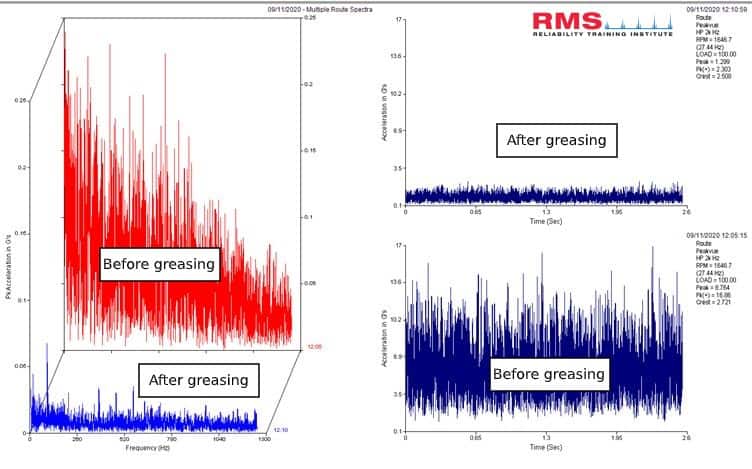 The AMS 2140 Machinery Health Analyser takes vibration data and analysis measurements to the next level.

What are the main benefits of PeakVue Plus?

PeakVue Plus enables the AMS 2140 Machinery Health Analyzer users to see at a glance not only whether a machine is in good working condition, but also the severity of an issue and whether it’s related to a bearing defect or lubrication. This helps field technicians determine root causes and quickly resolve equipment problems before failures occur and cause unplanned downtime.

What other applications could this be applied to?

Its anything with a bearing – anything! Emerson’s PeakVue technology cuts through the complexity of machinery analysis to provide a simple, reliable indication of equipment health via a single trend. PeakVue filters out traditional vibration signals to focus on impacting, a much better indicator of overall asset health on any type of rolling element bearing machine.

Do you offer Vibration Analysis Courses?

We do indeed! Students can choose from ISO 18436-2 CAT I to CAT IV. Courses are certified by BINDT or Mobius Institue. Study options include: Online, Public and Onsite. See the Vibration Analysis Courses page for more details.

The Flue Gas Recycle Fan is part of the COGA unit. The fan increases the efficiency of the COGA unit by recycling a proportion of the incinerated gases from the COGA stack. The fan is critical in sustaining high rates of operation on the plant, catastrophic failure of this fan would result in a COGA unit shut down. This would increase the emissions to the atmosphere and heavy fines could be imposed by the Environment Agency. 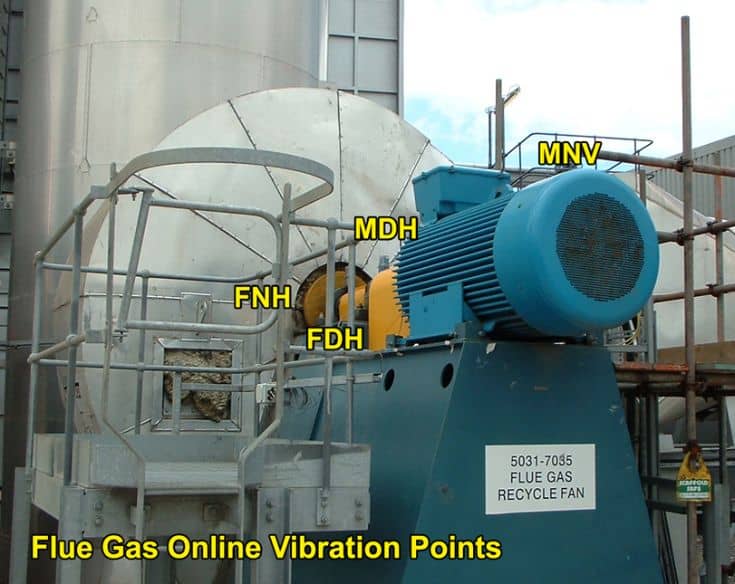 The above Photo illustrates the position of the fixed online vibration sensors that are fitted to the fan and motor (i.e. MNV = Motor Non Drive End Bearing Vertical). 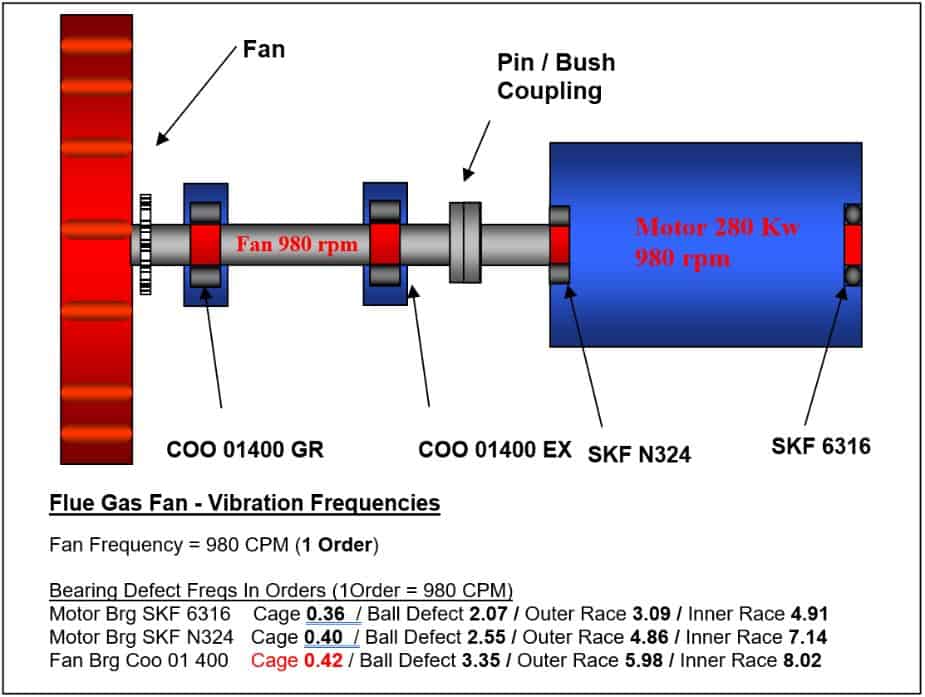 The above diagram shows the configuration of the flue gas fan. The above configurations, speeds, bearing details etc have being entered into the online system to assist in fault diagnostics. 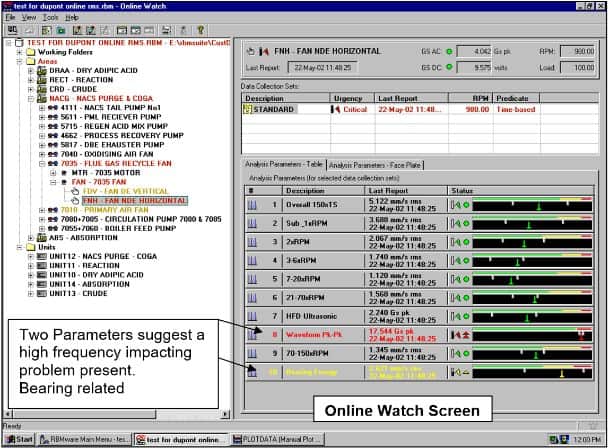 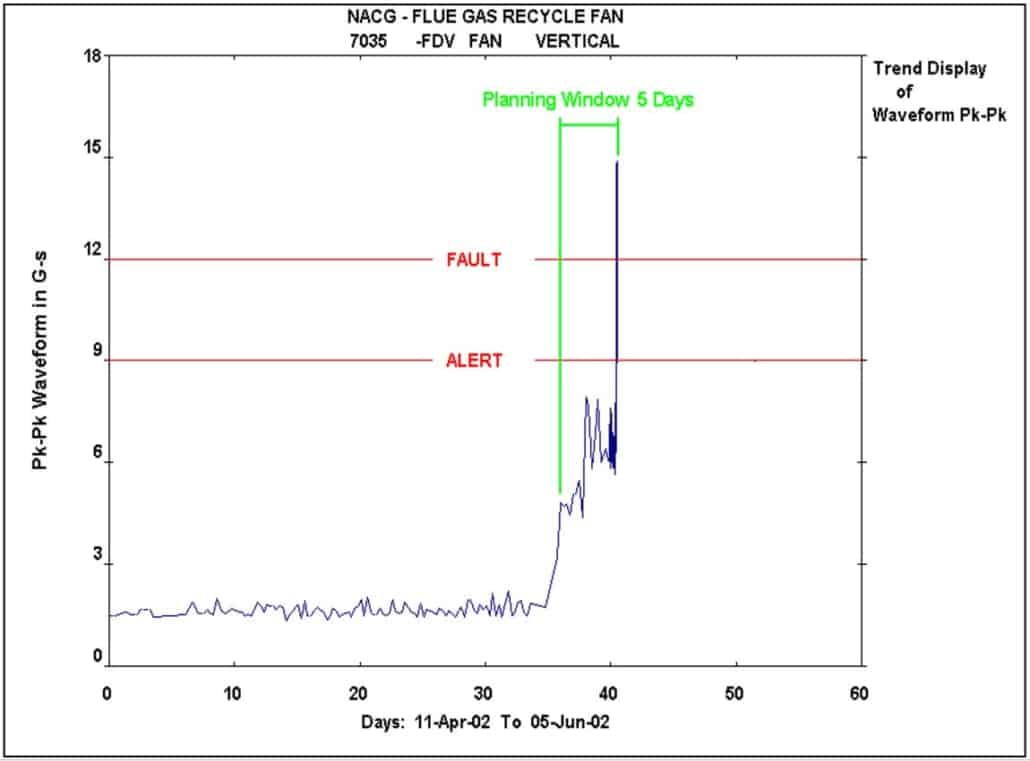 The above online trend is taken off the Fan Non Drive End Sensor;  note how quick the fault is deteriorating. Planning windows are rare on the COGA unit due to the environmental consequences if the plant is shut down.

The next step is to analyse the data to pinpoint why the vibration levels were increasing. Spectrum and Time Waveform analysis was used for this. Below is a spectrum taken from the online system. (Fan Non Drive end horizontal Bearing.) 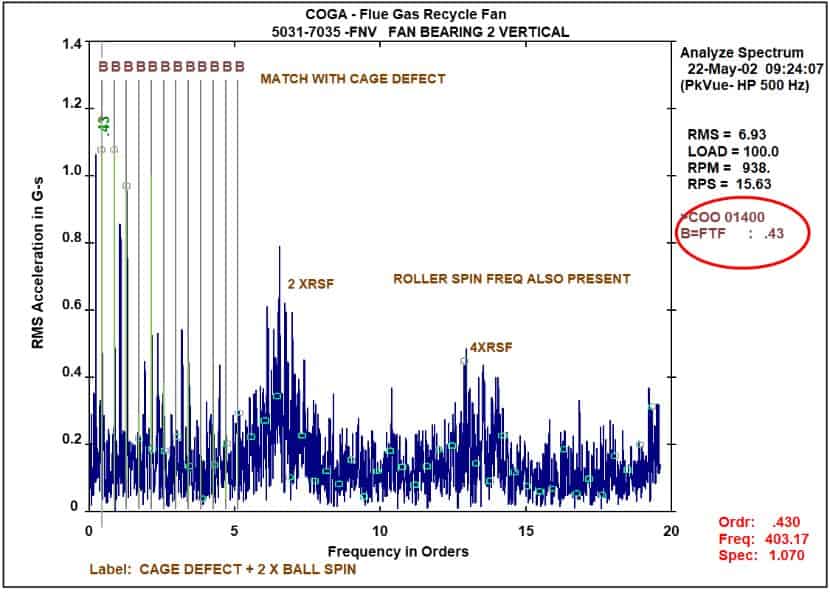 The filtered spectrum above indicates a problem with the cage and rollers on the NDE fan bearing, a clear match is made with the cage ( 0.4 orders ). 2X Roller spin freq is also present due to defects on the rollers impacting the inner and outer races as they rotate. Cage defects are well known to deteriorate quickly. 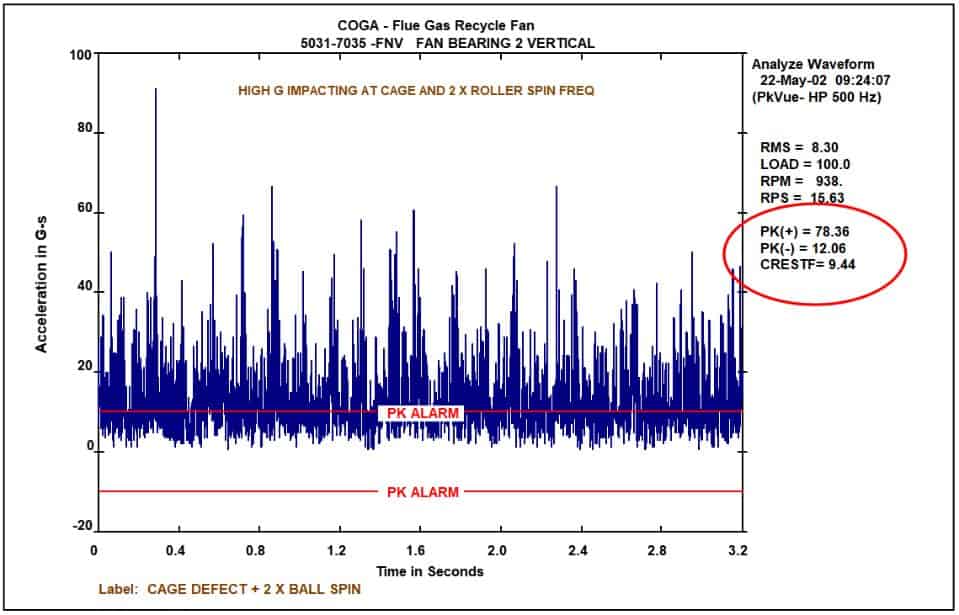 After discussions with production and maintenance, the reliability team decided to plan for the fan bearings to be changed at the earliest opportunity. New bearings were ordered and a scaffold erected ready for a quick bearing change. The opportunity came on the 21st May when the Dryer Plant shut down on an overload issue. The COGA was still running at this point, so a plan was formulated to shut the flue gas fan down in controlled manner so that the COGA unit could still be run, but at reduced rates, this was only possible because of the Dryer plant shutting down. 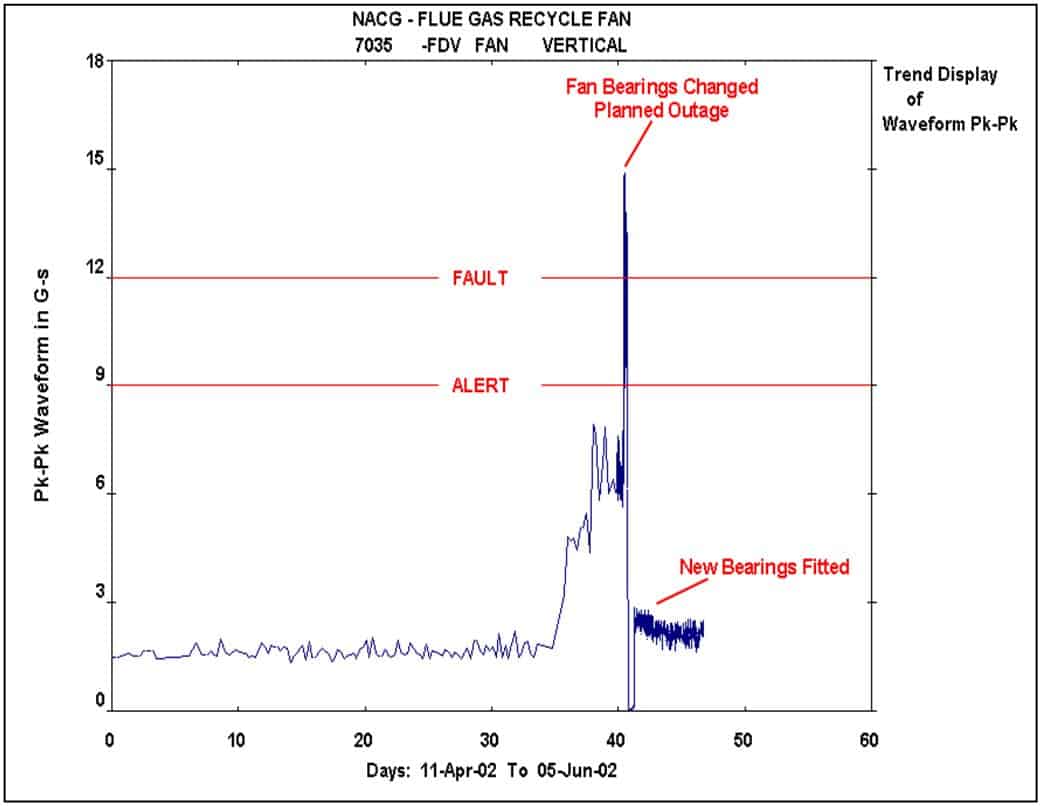 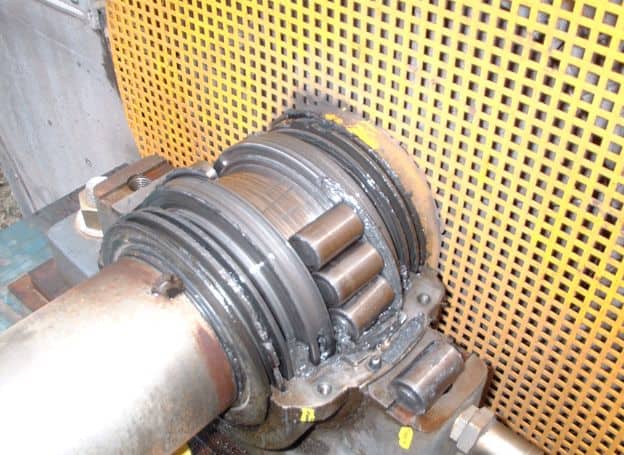 Upon inspection of the bearing it was found that the cage had disintegrated and the bearing had entered the final failure mode. The fan would have failed catastrophically later that day, this would have caused major shaft and fan damage. The bearings were replaced and the fan was running within 6 Hours.

The cleaned up NDE cooper fan bearing showing remains of the cage and the damaged rollers. 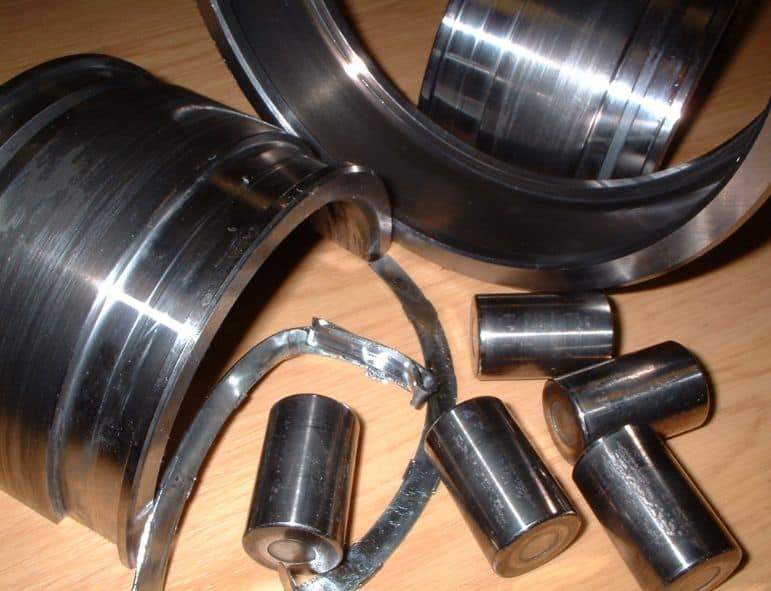 Production Losses: None, job planned in with Boil Out

If no credits/ Fines Potential £ 2 Million a /day

This case study highlights the fact that cage defects can rapidly deteriorate; in this case it only took 5 Days. This type of fault is often missed using conveniently walk round programs; continuous monitoring is sometimes the only way to pick these faults up.

How important is the Flue Gas Recycle Fan to site efficiency?

The fan is critical in sustaining high rates of operation on the plant, catastrophic failure of this fan would result in a COGA unit shut down. This would increase the emissions to the atmosphere and heavy fines could be imposed by the Environment Agency.

What was a key learning in the Flue Gas Recycle Fan case study?

This case study highlights the fact that cage defects can rapidly deteriorate; in this case it only took 5 Days. This type of fault is often missed using conveniently walk round programs; continuous monitoring is sometimes the only way to pick these faults up. 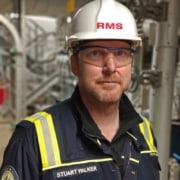 Stuart Walker has worked in the Condition Monitoring and Reliability sector for the last 23 years. He started his career working for Dupont as a Mechanical and Production Technician after completing a four year apprenticeship. It was here he was introduced to Condition Based Monitoring and setup a successful program at one of DuPont’s UK sites. He utilized technology’s such as Vibration analysis, Oil Analysis and IR Thermography moving the site from a time based maintenance strategy to a predictive and proactive one. Stuart then worked for a Reliability Consultant company for a number of years implementing and running a number of other successful CBM programs across the UK.

In 1999 he setup Reliability Maintenance Solutions Ltd with his colleague Dean Whittle. Together they have successfully grown the company over the last 20 years. RMS provides reliability consultancy, training, service, and products to a number blue chip companies across the UK, Europe and Middle East. Stuart has worked in many industry sectors including Oil & Gas, Petrochemical, Power and Paper. He is currently working on projects introducing and implementing the new Motion Amplification Technology within RMS and across a wide range of Industries at home and abroad.

By continuing to browse the site, you are agreeing to our use of cookies.

We may request cookies to be set on your device. We use cookies to let us know when you visit our websites, how you interact with us, to enrich your user experience, and to customize your relationship with our website.

Click on the different category headings to find out more. You can also change some of your preferences. Note that blocking some types of cookies may impact your experience on our websites and the services we are able to offer.

These cookies are strictly necessary to provide you with services available through our website and to use some of its features.

Because these cookies are strictly necessary to deliver the website, refuseing them will have impact how our site functions. You always can block or delete cookies by changing your browser settings and force blocking all cookies on this website. But this will always prompt you to accept/refuse cookies when revisiting our site.

We fully respect if you want to refuse cookies but to avoid asking you again and again kindly allow us to store a cookie for that. You are free to opt out any time or opt in for other cookies to get a better experience. If you refuse cookies we will remove all set cookies in our domain.

We provide you with a list of stored cookies on your computer in our domain so you can check what we stored. Due to security reasons we are not able to show or modify cookies from other domains. You can check these in your browser security settings.

We also use different external services like Google Webfonts, Google Maps, and external Video providers. Since these providers may collect personal data like your IP address we allow you to block them here. Please be aware that this might heavily reduce the functionality and appearance of our site. Changes will take effect once you reload the page.